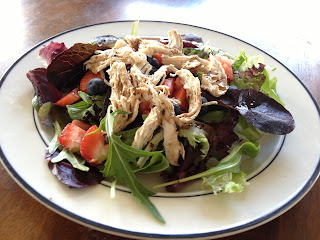 Winter is coming to a close here in the Valley. Since we've actually already had a 90 degree day, I'm guessing we're in that sweet spot where we have two weeks of Spring before everything becomes, well, deserty.

In a last ditch attempt to enjoy the winter, my guy and a few of our friends toddled off to the mountains in Utah for a day of Snowboarding. Since I have an angry knee, I went for the pretty views and the chance to escape.

We were staying over night in a little condo so that everyone could get up early and make the first run. My friend Chat  had made the worlds most enormous salad and insisted I try a plate. It had about twelve ingredients and was really delicious. I picked out the celery because I'm weird like that. He'd mixed everything up and added some chicken that he baked in the oven. I nearly went for seconds.

So I spent the day in the lodge, sipping on Maple Crown and Coke (I had a flask because I'm smart like that). Then when we got home I couldn't stop thinking about that damn salad. So off to the grocery store I trundled and picked up the goodies to make a revised version. I didn't want to bake the chicken and I luckily remembered that my friend Kyle had told me that he'd taken to poaching chicken for salads and then refrigerating it to eat through the week. Bingo. Worked like a charm.

And so, this salad was born. I can't stop eating it. It's so simple and delicious and ridiculously low calorie.

Play with your quantities here until you're happy with what you have. You'll only use about 1/3rd of a chicken breast per salad, but of course you need to cook the whole thing.

Bring a medium pot of water to a boil and drop in the chicken breast. You need enough water to just cover the chicken. Turn the heat down to a low simmer, cover and cook for twenty minutes. Check to make sure it's cooked all the way through, then shred it. Season with salt and pepper. You can then use about 1/3rd per salad.

Put the spring mix on a plate. Scatter over your diced strawberries and blueberries. Top with the poached chicken and drizzle over some balsamic vinegar salad dressing. Or, make your own with 1 teaspoon flavored olive oil and one teaspoon balsamic vinegar.

Makes one salad, with leftover chicken for two more.
Posted by Redd at 1:52 PM No comments: Links to this post

Going Back to the Start with Rhubarb Crumble 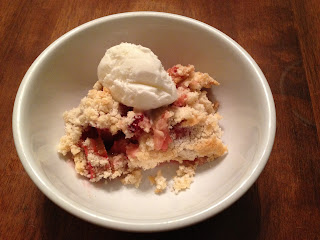 I posted a little while ago about how I'm sort of in this rut. I finished my book and after that was done it's been a "now what?" situation. I've not really been spending much time in my kitchen, and when I have I've been making old faithful type food that I've already told you about here on this blog.

I couldn't figure out what to do now that I've finished something big. Then, I got all zen and stuff and realized that what I needed to do was take a breath and go back to the beginning. I needed to go back to my childhood. To something familiar and comforting. I needed Rhubarb Crumble.

Rhubarb is a lot less common in American than it is in England. I rarely see it fresh here, and I've never seen it growing.

Back in England, when we moved into the house that I lived in for the five years before I moved to America I remember my Mother going through and ripping out a lot of the old garden. I helped somewhat, until I accidentally speared a frog with a garden fork. I became quite the indoor girl after that. It still gives me the willies thinking about it.
Anyway, so Mum went and dug up a big Rhubarb plant that she didn't want. She went ahead and put it on a pile of scrap sticks and woody things that would eventually be burned. It was sitting on top of the pile, half hacked to pieces, and the darned thing kept on growing. I think it sat and flourished for about two weeks.
So Mum hacked off all the green parts again and then had a nice little bonfire to burn all the green scrap that wouldn't be good for composting. After the bonfire there was a pile of rubble and a few chunks of unburnt wood that didn't quite finish combusting all the way. And about a week later, this pile was of course growing bright green Rhubarb stalks.

This Rhubarb Crumble is my Mum's recipe. She used to make it here and there when I was young, and I think my Nana used to make it too. It was served frequently with custard or vanilla ice cream, and I recommend you do the same thing!

The easiest way to make this is in a pie plate or an 8x8 pan. You can throw in some strawberries as well if you need to use some up. I had a few in the fridge the last time I made this and sliced them over the rhubarb before I layered on the topping.

In a small bowl, work the flour and butter together with your hands until it resembles breadcrumbs. Make sure you start with cold butter and work pretty quickly as you don't want it to melt. Mix in the rest of the sugar and spread this topping evenly over the rhubarb.

Bake for 45 minutes until the top has become golden brown.

Eat with a dollop of ice cream, custard or whipped cream while tucked up in bed watching the Top Chef finale. 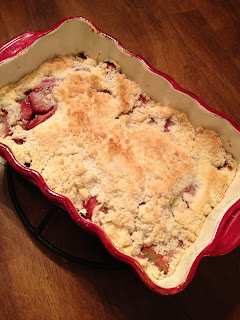 Posted by Redd at 10:36 AM No comments: Links to this post