Nailed It! The Bacon and Cheese Scone Quest 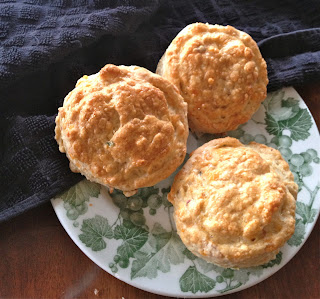 I promised you this recipe would come eventually! And lo, here it is!!


So, when I was a wee lass (which I typed first as ass... hilarious), my Nana used to make these bacon cakes. They were triangular shaped like scones often are, moist, delicate and delicious slathered in butter and we would have them for tea. Nana always made "tea" at 6pm. It was her version of supper, the last meal of the day, and it would be malt loaf or eggy bread or ham sandwiches or bacon cakes or something else delightfully carby. It was usually my favorite meal. I would spend my six week long summer holidays with her and I loved tea-time almost as much as I loved blackberrying and rollerskating and her bedtime stories.

I have a few of her recipes and one of them is for bacon cakes. I've diligently made it a few times, and while the result is pretty good, it isn't what my ten year old self remembers. I've tried to tweak it a lot, and finally I decided that instead of just creating a replica, I need to create something that I really like.... something of my own.

I started over, tweaking, making, kneading, shaping, re-doing. I tried adding ketchup, Worcestershire sauce, cream cheese. I played with the amount of baking powder, the type of milk, the quality of the butter. Until finally one day a few weeks ago I got the result I wanted. I think I've gone through at least nine incarnations of this recipe, but it's finally the one I like best. Ironically, it's probably the one with the fewest ingredients... the simplest version. These are perfect just out of the oven, cut in half and spread with some good quality salted butter.

In a mixing bowl, combine the butter with the flour, salt and baking powder until it becomes like breadcrumbs. Stir in your cheese, scallion and bacon. Beat the egg into the milk, then slowly add to the dry mixture until combine. Try to mix it as gently and as little as possible.

Roll out the dough until it is an inch thick and cut into circles with a four inch or so cookie cutter. I, owning cookie cutters only in the shape of candy canes and ninjas, used a jam jar lid.

You should get about 8-10 circles out of it. If you like, you can do a quick egg wash glaze over these by beating an egg with a couple of tablespoons of milk and brushing with a pastry brush. It's not completely necessary, but I would take the time if you have it.

Bake for 20 minutes until well risen and turning slightly golden. If you need to reheat these for later, do use the oven and not the microwave... it's much better.

Slather with butter and enjoy hot, with fond memories of your childhood drifting through your head.