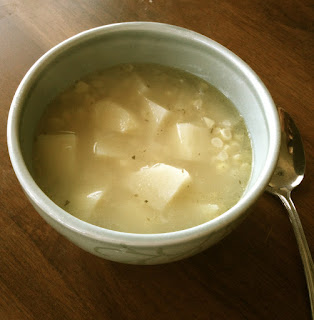 Back when I lived in Atlanta, I used to work at the Atlanta Shakespeare Company. They had a kitchen attached to the theatre, and they would cycle through different menus based on the season.

When I worked there, I frequently ate dinner there and there were a few favorites from the menu that I would always be happy to order.... Dragon Noodles, Spinach Salad, Chocolate Lava Cake, Apple Crisp and the Corn Chowder.

I loved that Chowder and I would eat it almost every day. I always had it with a nice crusty wholewheat roll. It was hearty and delicious and to me, it felt like the perfect Fall food. I've never liked soup much, but for some reason I always love chowder.

I have a lot of really happy memories of that place. It's where I found the bulk of my chosen family. Even though I don't live there any more and will probably never work there again, it's always going to feel like home to me. Fall and Spring are always my favorite times of year in Atlanta.

It's still hot in the desert. Tomorrow it will hit triple digits, but this should be the last time. It's October now, and the weather should start dipping soon. I wore a hoodie outside the other day. Granted it was 1am at a park and the sprinklers were on, but I still wore a hoodie.

Pumpkin Spice Lattes are in the coffee shops. The mountains that surround the valley are starting to see a touch of snow. Soon it will be Fall. So I made my Fall comfort food, willing the season to show up in Las Vegas.

I miss Appalachia. But hey, the chowder is delicious.

Bring 6 cups of water to a boil on the stove. Cut all of the corn kernels off the ears of corn and set them aside. Take the corn cobs, break them in half and put them in the boiling water with the bay leaves. Add in half the tarragon and cover. Simmer for 30 minutes.

In a heavy bottomed pan, melt the butter. Add in the onion and cook for 5-8 minutes until softened. Add in the garlic and cook for another minute. Then, add in half the cup of wine and let reduce.

While it is reducing, strain the corn broth and discard the cobs. Save the bay leaves.

Pour the broth into the onion mixture. Add the potatoes, bay leaves, the rest of the wine and the tarragon. Add a few grinds of pepper and then salt to taste. You'll be using probably quite a lot of salt.

Simmer for 10 minutes, then add the corn kernels. Simmer for 15 more minutes until the potatoes are soft.

Eat with whole wheat bread and dreams of turning leaves.