Every month, Lela's at the Sheraton in Bloomington, MN, has a wine dinner. Basically, it's an opportunity for their chef, Stewart Woodman, to play.
We've been to a bunch of these now and, with the exception of a very misguided grilled cheese sandwich, the food has always been excellent. Woodman has a really great sense of pairing food with wine, and he's not afraid to be dramatic and interesting. The first one we went to, he served Elk Tenderloin and it was just stunning.

Conveniently, the dinner in April happened to be on my birthday, so it was pretty easy to insist we go. Here is the menu: 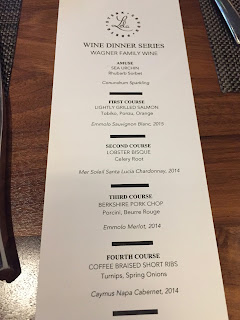 So first off, Sea Urchin on Rhubarb Sorbet 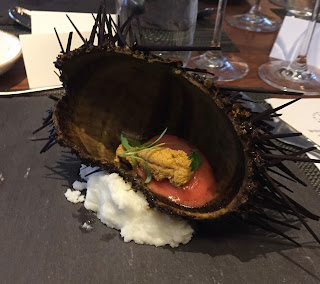 This was... interesting. I love Sea Urchin. I like how it's delicate and fatty and sweet and unctuous. This rendition was good, but I feel as though there was a ratio issue. The Rhubarb Sorbet was so cold and tart. I think the flavors worked well together but would have rather had a piece of Sea Urchin with a few blobs of the sorbet. The urchin got lost in the noise.

Next we had Salmon with Tobiko in broth: 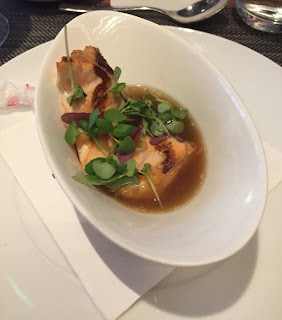 This was light, bright and pretty. My Tobiko fell into the broth and I didn't really get to taste it that much, but one of my dinner companions said it was fantastic and I believe her. Delicate, savory, enjoyable. This was a good dish after the sea urchin. It wasn't mind blowing, but it was tasty.

I didn't take a picture of the Lobster Bisque (and honestly until I just looked at the menu to get the order down, I forgot we had it). Woodman's Lobster Bisque is really nice. I've had it before and it's just the right amount of creamy and fishy and meaty. It's a winner every time.

And then, of and then, we had the Berkshire Pork Chop.

This was beyond the star of the show. 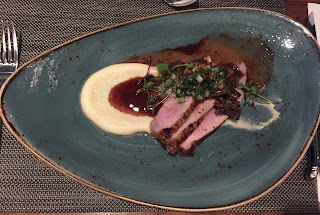 It looks unassuming, right? Almost simple? It wasn't. It was absolutely gorgeous. The beurre rouge was great, the puree was lovely, but that green stuff on top? That is a ramp chimichurri. Ramps, if you're not familiar, are wild garlic. They are most commonly found in spring time, and I have never even thought to put them in a chimichurri before. The balance was fantastic. The portk was cooked perfectly, the Emmolo Merlot that paired with this was delightful. Best dish I think I've ever had at one of these dinners.

We had short ribs too. 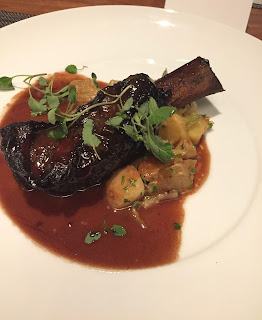 But they weren't the sumptuous deliciousness of the pork chop, so, you know. That happened.

Now I have to figure out how to get my hands on all the ramps in the world so I can make that sauce.